What are the most popular fiction genres? 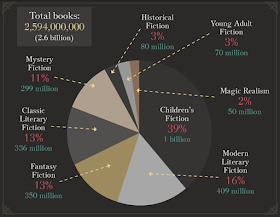 Determining the most popular fiction genres is not as straightforward a task as it may seem. Is popularity judged by how many people say they prefer a certain genre, by books actually read, by revenue, or by books published? Each of these questions will yield a different answer.

Time period is also a consideration. Are we looking at last year's books, last decade's books, or all-time publishing and sales records? The infographic to the left from Ebook Friendly is a compilation of all book sales for which there are figures. Children's books are clearly the winner. But one has to take into account the boost in sales generated by the Harry Potter series, which alone generated $25 billion in revenue, selling more than 400 million books worldwide. And while the Harry Potter books may be classed as children's fiction, they may also be classed as cross-over, fantasy, and magical realism.

Given these complexities, let's break down what is meant by popularity based on what people say they read (which encompasses books people borrow from libraries), which books are sold, which genres generate the greatest revenue, and which books agents and publishers predict will sell, as these will produce the greatest number of contracts.

According to Statistica, the most popular genre in the U.S. is Mystery/Thriller/Crime books. Nearly half of their respondents said they had read books in this genre in 2015. This was followed by Romance, which nearly a third (27%) had read.

However, according to Nielsen BookScan, which compiles data on actual sales, the most popular adult genre in 2015 was general adult fiction followed by romance and suspense/thrillers. Children's books sold more than three times the number of adult books.

The most popular genres according to 2015 Nielson sales data are:

What Genres Do Agents Request?

The top fiction genres that agents request don't necessary correspond to the genres with the most sales. The reason for this is that agents work on commission. Their percentage (usually 15%) is based on the amount of money books generate. So while children's books may sell more copies, they usually cost less than adult or YA fiction. In addition, media options for games, film, and TV are more likely to pan out for YA and adult contracts. (Harry Potter breaks all the rules.) According to Query Tracker the top ten most requested genres are:

Which Genres Make the Most Money?

At $1.44 billion, Romance and Erotica are #1 in sales. That figure includes self-published romance as well. With 30 million dedicated readers, it's hard to miss if you write in this genre. As anyone in advertising knows, sex sells.

Inspirational and Religious books generated $720 million in 2012. This number reflects the fact that the Bible is the most published book of all time, but it also reflects the popularity of self-help and other inspirational titles, which have gained a large share of the market.

Fantasy and Science Fiction come in at $590 million. Like Romance, Sci-fi and Fantasy have dedicated readers, which means there is a steady market. This is why so many agents include SFF on their wish lists.

You will notice that the books agents are most interested in don't have a one-to-one correspondence with the books that have generated the most sales. For example, many agents put YA at the top of their lists, while Romance actually generates the most sales. The reason for the discrepancy is two-fold; 1) Romance authors can easily publish their work without the help of an agent, either with a Romance publisher or on their own, and 2) YA is a developing market.

According to The Balance, the number of YA titles more than doubled between 2002 and 2012 — over 10,000 YA books came out in 2012 versus about 4,700 in 2002, and this upward trajectory is only increasing. Agents not only choose manuscripts based on what is happening now in the publishing industry, but on projected sales. It takes a year or more after a contract is signed to get a book on the shelves, and that's not counting the time it takes to make a sale. Agents, like publishers, have to keep an eye on trends.

Which Genre Should You Write?

That is an easy question to answer: Write whatever genre that suits you. Don't base your decision on the genres agents want, or on the market. If your heart isn't in what you are writing, you'll only make yourself miserable. Ultimately, the writers who are the most successful have followed their own ideas, their own inspiration, their own muse. My advice is to write what you care about — and keep your day job.