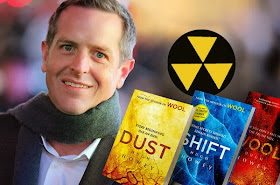 Hugh Howey's success story does not fit into any of the myths instilled in us from early childhood.

He was not discovered by a well-connected agent, or by an editor in a major publishing house. He did not win fame on his first try as a writer, nor did he work for years in a freezing attic, until, shortly before losing his fingers to frostbite, he finally achieved the recognition he so richly deserved.

Like most of us, Hugh Howey had a day job. He worked sporadically - and happily - at writing, putting his partially completed books up on Amazon for 99 cents, until one of them took off. This is not an unheard of chain of events for self-publishers on Amazon. In fact, it is the only way to make it on Amazon's platform.

What is unusual about Howey is that he remained a self-published author on Amazon's Kindle platform - even after he landed a book deal with Simon and Schuster. He also turned down offers from agents - until one of them dangled Hollywood before him.

Why did Howey retain his electronic rights?

"It’s a wonderful way to build your readership. My recommendation to anyone who’s got a backlist or a career in a traditionally published model is to break out and test the waters in self-publishing. It’s not going to do anything but good for your career."

And for those of us who have not been published?

"You have as good a chance of winning a publisher over by getting sales going through your self-published works as you do submitting to the slush pile."

At first, Hugh Howey’s decision to walk away from a small press contract and self-publish didn’t seem all that remarkable. After assuming complete control of his work, he kept his day job and began writing and releasing e-books (as well as some print books) in his off hours, happy to be simply sharing his stories with whatever readers might find them. But when one of those books, Wool, unexpectedly took off, everything changed. Howey found himself at the top of e-book bestseller lists—and at the forefront of a new age  of publishing.

The opening chapters of Wool first appeared as a $0.99 e-book novella via Kindle Direct Publishing in July 2011; Howey had written the post-apocalyptic story, about a community of people living underground in giant silos, without intending to immediately follow it up with more installments. “I self-published it and went right back to my next work,” he says. But by October, Howey noticed Wool was eclipsing all of his previous works and was positioned to sell 1,000 copies by the end of the month. “I figured this was going to be the pinnacle of my career,” he says. So he promptly tabled the unrelated project he’d been planning for National Novel Writing Month and instead focused on writing more of the Wool saga.

What happened next is a story that rivals the success of self-made sensations Amanda Hocking, John Locke and E.L. James. The subsequent, rapid releases of the next four e-book installments of Wool rocketed Hugh Howey’s name to the top of Amazon bestseller lists in several categories. In January 2012, he released the Wool omnibus (the combined five parts), which spent two weeks on The New York Times e-book fiction bestseller list and received the Kindle Book Review’s 2012 Best Indie Book Award in the sci-fi/fantasy category. By that summer, Howey was selling 20,000–30,000 digital copies of Wool a month … and making a monthly salary of $150,000 from e-book sales alone. He quit his day job.

Read the rest of this article, including a revealing interview with Hugh Howey, HERE.
Erica Verrillo at 9:50 AM
Share